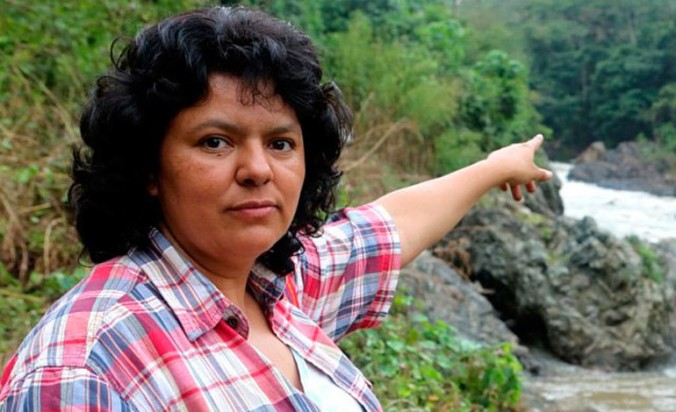 This article originally appeared in Latino Rebels, November 1, 2016.
On June 28, 2009, when Hillary Clinton was Secretary of State, the democratically elected president of Honduras, Manuel Zelaya, was overthrown by a military coup. Under US law, all military aid to Honduras should have ceased immediately. Sec. Clinton was directly involved in continuing military aid to Honduras and in maneuvering behind the scenes to support the coup and thus the already beleaguered country’s downward spiral into greater poverty and violence, including rape and femicide, which it precipitated in Honduras.

If you consider Honduras, it becomes difficult to argue that Clinton is in any meaningful way a protector of women and children specifically or of human rights generally.

Manuel Zelaya took office as president of Honduras on January 27, 2006. A leftist, Zelaya put in place free education and meals for children, subsidies to small farmers, lower interest rates, and free electricity. Owners of American, Honduran, and multinational corporations disliked him immensely. He supported a 60% raise in the minimum wage – to $213 per month for rural workers and $290 for urban workers. He pledged rural, indigenous farmers he would help them recover land rights.

This “infuriated two U.S. companies, Chiquita Brands International (formerly United Fruit) and Dole Food Company,” said John Perkins in an interview with Truthout. Chiquita Brands is a California based producer and distributor of bananas. Dole Food Company is a multinational agricultural company also headquartered in California. Above all, they did not want a raise in Honduras’ minimum wage.

Writing two weeks after the coup, Nikolas Kozloff wrote that Colsiba, the Coordinating Body of Banana Plantation Workers in Latin America, compared the horrendous labor conditions on Chiquita plantations to “concentration camps”. While the comparison is inflated, it contains agonizing truth. Women and girls as young as 14 worked from 6:30 AM to 7:00 PM. Covered in rubber gloves, their hands burned. They had sued for damages against Chiquita for exposing them in the fields to DBCP, a pesticide which causes sterility, cancer, and birth defects in children.

The straw that broke the camel’s back for business interests was when Zelaya steered to an upcoming election ballot a non-binding resolution asking voters whether they wished to reform the constitution. The gist of this question was to ask those in rural communities whether they wanted to continue being subjected to foreign corporate mining practices.

The opinion poll was scheduled for June 28, 2009. In the early hours of that day, armed military forces carried out the coup. Still in his pajamas, they kidnapped Zelaya at gunpoint and took him to Costa Rica.

Fifteen US House Democrats, according to Adam Johnson for Foreign Policy in Focus, condemned the coup. Led by Rep. Raúl Grijalva, they sent a letter to President Obama insisting that Secretary of State Clinton and her State Department “fully acknowledge that a military coup has taken place” and “follow through with the total suspension of non-humanitarian aid, as required by law.” Clinton declined. This means that she made possible the condition that allowed aid to continue to flow to military forces.

In a cable to Clinton and other top US officials, US Ambassador to Honduras, Hugo Llorens, wrote that the coup was an “open and shut” case without any doubt whatsoever that the kidnapping “constituted an illegal and unconstitutional coup.” You can read the cable here.

It seemed obvious to countries and organizations around the world that the overthrow of Zelaya was illegal, i.e.a violation of international law, and dangerous to the concepts of national sovereignty, democracy, and constitutional order.

Israel supported the coup; the United States backed it.

Organizations which condemned the coup included the Association of Caribbean States, the Bolivarian Alliance for the Americas, the Caribbean Community, the Central American Bank for Economic Integration, the European Union, the Inter-American Bank Development Bank, Mercosur, the Organization of American States, the Union of South American Nations, and the United Nations.

An organization which financially supported the coup, on the other hand, was the Millennium Challenge Corporation [MCC], a US foreign aid agency established by the US Congress under the George W. Bush administration. One of its strongest supporters is the conservative Heritage Foundation. Among the criticisms MCC received about this period was that it disbursed some $17 million to support the coup. Hillary Clinton was chair of the board of directors.

An election was set to choose a new president. According to Lee Fang for The Intercept, “major international observers, including the United Nations and the Carter Center, as well as most major opposition candidates, boycotted the [2009] election.” Nonetheless, Porfirio Lobo became the country’s new president.

Meanwhile, behind the scenes, Clinton worked to avoid returning Zelaya to office. Clinton admitted she used the power of the State Department to support the coup: “In the subsequent days [after the coup] I spoke with my counterparts around the hemisphere” Clinton wrote in her book, Hard Choices. “We strategized on a plan to . . . render the question of Zelaya moot.” In other words, she actively connived to prohibit the return of Zelaya even though he was the democratically elected president of Honduras by delaying any action that might help force the illegally elected Lobo government to step down. If you look in the paperback version of Hard Choices, you won’t find these lines. They have been edited out.

The military coup which displaced Manuel Zelaya catapulted already impoverished and violent Honduras into a downward spiral into greater poverty and more violence.

Mark Weisbrot, co-director of the Center for Economic and Policy Research and president of Just Foreign Policy, summarized the effects for Al Jazeera America. “The homicide rate in Honduras, already the highest in the world, increased by 50 percent from 2008 to 2011; political repression, the murder of opposition political candidates, peasant organizers and LGBT activists increased and continue to this day. Femicides skyrocketed. The violence and insecurity were exacerbated by a generalized institutional collapse. Drug-related violence has worsened amid allegations of rampant corruption in Honduras’ police and government. While the gangs are responsible for much of the violence, Honduran security forces have engaged in a wave of killings and other human rights crimes with impunity.”

To repeat, femicides skyrocketed as did rape.

According to Annie Kelly, writing from Tegucigalpa, women began to be murdered at the rate of one a day following the coup while the police “turned a blind eye”. In the month following the coup, according to a report by Oxfam Honduras and the Honduran Tribunal of Women against Femicide, there was a 60% rise in the number of femicides. In that month, the bodies of more than 50 women, in assassinations related to their gender, were found in Tegucigalpa and San Pedro Sula, Honduras’s largest cities. The report accused the Clinton backed Lobo government of complicity in the femicides. By 2011, there were reports of 1,110 femicides with only 4.2% resulting in convictions.

Some of the women’s lives were taken by the deadly Mara gangs in order to send a message to the women’s families. Others were raped and threatened with the deaths of their families if they resisted.

Many of these women, some with their children, fled to the US. Others fleeing were children without their mothers. American University professor, Adrienne Pine, concluded that “if it weren’t for Hillary Clinton,” there would not have been the refugee crisis from Honduras at the level that it is today. “Hondurans would be living a very different reality from the tragic one they are living right now.” Pine was quoted in an article by Marjorie Cone, professor emerita at the Thomas Jefferson School of Law, in “Hillary Clinton’s Link to a Nasty Piece of Work in Honduras”.

Clinton was unsympathetic. In 2014, at the height of the surge of Central American women and children crossing the United States’ southern border, after having survived Mexico’s treacherous 2,000 miles, Clinton told CNN’s Christiane Amanpour that, “it may be safer for the children to remain in the US”, but they “should be sent back”. Dozens were returned to their deaths.

The most well-known of the women who were murdered in Honduras was Berta Cáceres. Her murder as well as anything else, according to Adam Johnson, an associate editor at AlterNet, exposes Clinton’s “grim legacy in Honduras”.

On June 28, 2009, the day of the coup, the Washington, DC based Inter-American Commission on Human Rights [IACHR], placed Berta Cáceres’s name on a list of people whose lives were in danger because of the coup. The following day, it acknowledged that military forces had surrounded her home. Cáceres had a long history of activism including protesting illegal logging, plantation owners, and the presence of US military bases on indigenous Lenca land.

In 2014, Cáceres specifically singled out Sec. Hillary Clinton for her role in the Honduran coup. Here is an excerpt from a Democracy Now! interview and transcript.

We’re coming out of a coup that we can’t put behind us. We can’t reverse it. It just kept going. And after, there was the issue of the elections. The same Hillary Clinton, in her book, Hard Choices, practically said what was going to happen in Honduras. This demonstrates the meddling of North Americans in our country. The return of the president, Mel Zelaya, became a secondary issue. There were going to be elections in Honduras. And here, she, Clinton, recognized that they didn’t permit Mel Zelaya’s return to the presidency. There were going to be elections. And the international community—officials, the government, the grand majority—accepted this, even though we warned this was going to be very dangerous and that it would permit a barbarity, not only in Honduras but in the rest of the continent. And we’ve been witnesses to this.

On the morning of March 3, 2016, Cáceres was shot dead in her home by armed intruders. Under “precautionary measures” recommended by the IACHR, the Honduran government was supposed to have protected her. However, on that morning, they were nowhere to be found.

In the days following the murder, Amnesty International criticized President Hernández for his refusal to meet with Cáceres’ relatives, human rights defenders, and AI. It condemned “the Honduran government’s absolute lack of willingness to protect human rights defenders in the country” and noted that the Honduran authorities had failed “to follow the most basic lines of investigation, including the fact that Berta had been receiving serious death threats related to her human rights work for a very long time.”

A former soldier with the US-trained special forces units of the Honduran military reported that Cáceres’ name was included on a hit list distributed to them months before her assassination.

Did Hillary Clinton pull the trigger on Berta Cáceres? Did she single-handedly carry out the military coup which overthrew Manuel Zelaya? Did she herself rape any young girl or woman in Honduras or threaten the lives of their families? Did she make vulgar statements about the genitals of women and girls? The answer to all these questions is, of course, “no”.

Yet, it is beyond doubt that Hillary Clinton, while she was Secretary of State, actively supported and made possible the conditions which led to femicide, rape, and other human rights violations in Honduras. I contend that one may vote for her but commit to exposing and condemning her record. In particular, those who vote for her have a moral obligation to women and children, especially those in Honduras, to tell the truth about her. Moral outrage compels us to break the silence.

2 thoughts on “Break the Silence: Hillary Clinton’s Role in the 2009 Military Coup in Honduras”